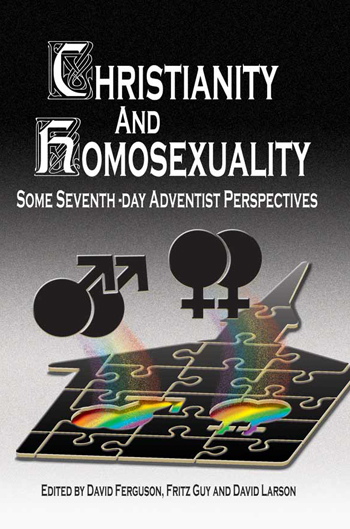 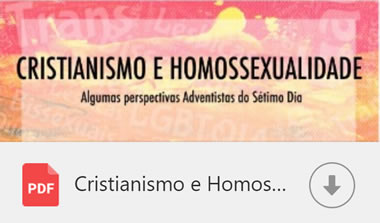 Homosexuality is one of the most difficult problems the SDA church struggles with today. It's a subject that has many aspects. First the theological aspect: what does the bible say about it? How can one explain the parts in the bible that deal with homosexuality? But besides these questions, there are many other aspects. How does the church deal with its members who are homosexual? Can the church offer them employment/keep them in employment? Public opinion also plays a constant role. What does the outside world think of a church who apparently has great difficulties with homosexuals among it's membership? It is a fact that there are many homosexual Seventh-day Adventists and it is also a fact that they face much misunderstanding and even hostility, also (even) within the church.

The official point of view of the church is to be found in four declarations that have been published in the last couple of years. In short, they say that it is clear that the church welcomes all those who have a different orientation from the majority, but at the same time, it declares that they are not allowed to practice that other orientation. Sexuality, so it states, should be within a formalized, monogamous, permanent relationship of one man and one woman, and those who do not live in a matrimonial relationship can only live in celibacy.

Recently the independent Adventist organisation Adventist Forum (who also publishes Spectrum magazine) released a number of essays about many important aspects of homosexuality within the Adventist Church. Several people who are Adventist and homosexual or are related to them, have contributed. Next to a biographical section, there is a section that deals with a number of bio-medical perspectives. In the next part of the book the contribution of Professor Ronald Lawson, an American lecturer of sociology, who is homosexual and Adventist, is of special importance. He offers ab outstanding documented summary about how the Adventist Church has dealt with homosexuality through the years.

Of course, many readers will be especially interested in studying the fourth part of the book. In this part, four adventist theologians speak. Their vision on what the bible says about homosexuality vary very much from each other. On the one hand, two of them put forward that the bible itself doesn't know of the existence of variation in sexual orientation, but just speaks about homosexual behavior of straight people. One of the other theologians is very clear in his judgement that the bible doesn't give any space for homosexual conduct. The decision seems to be how one interprets the bible texts that deal with homosexuality. In the fifth and last part of the book some social and practical aspects come up.

This book can serve those greatly who want to come to a clearer understanding about what homosexuality is all about and how a Christian should deal with it. In this aspect another book that recently was published may also be of help: Richard M. Davidson's "Flame of Yahweh: Sexuality in the Old Testament" (Peabody MS (USA: Hendrickson Publishers, 2007), 844 pages; price $ 29.95. This book can be ordered on http://www.amazon.com/. More information about Adventists and homosexuality is to be obtained from the website of the Kinship organisation, an international organisation of Adventist homosexuals that has more than 1000 members. See http://www.sdakinship.org/. The official documents of the Adventist Church are to be found on the website of the General Conference http://www.adventist.org/ (click on Adventist Beliefs).

Translation: Ruud Kieboom
Reinder Bruinsma was president of the Dutch SDA-Union Conference. He retired in 2007

Are same-sex relationships natural? Do homosexuals and heterosexuals deserve equal treatment in the church? Is sexual preference chosen, or is it biologically determined? Are the Leviticus 18 and 20 edicts timeless moral laws that apply equally to Christians as to Israel? Do Paul’s comments on “unnatural” relations (Romans 1) cover all same-sex relations, or only the perverse practices of the godless Gentiles? These questions and many more are addressed in this book.

Most of the 18 papers in the book were presented at a 2006 conference organised by Seventh-day Adventist Kinship International, an organisation set up in the 1970s to nurture gay and lesbian Adventists. Eight were written by current church academics. Most question aspects of the traditional church position on same-sex relations. The reader faces two challenges: firstly, to properly assess the growing body of literature that suggests homosexuality is a predisposition, not a choice; and secondly, to re-examine what Paul is really saying in Romans 1.

Part one is biographical, presenting the stories of Sherri Babcock, the great-great-granddaughter of one of the founders of Atlantic Union College; Leif Lind, former SDA pastor and missionary; and Paul Grady, son of a church pastor, missionary and administrator. All three are gay. According to Lind, coming out of the closet was “the hardest thing I have ever done.” Lind lost his marriage, his career, and his respect and acceptance in the church – a terrible price. But he had to be honest about who he was. “Who would choose to pit themselves against all odds and make life as difficult as possible if it were really a matter of choice or sexual ‘preference’? Not too many people I know,” writes Lind.

Part two examines biomedical perspectives. Research continues to suggest that homosexuality has a genetic predisposition and is biologically determined, a conclusion that was widely resisted. One of the last impediments was removed in 1973 when the American Psychiatric Association unexpectedly declared that homosexuality was not an illness. As Fulton asks, if homosexuality is neither a choice nor an illness, how is the church going to deal with its anti-gay bias?

Part three presents insights from behavioural science. Change ministries have failed repeatedly. The church that has called itself “the caring church” and a “welcoming church” has not given evidence of these claims in its treatment of gay members and workers, most of whom have been forced to live deeply closeted, lonely lives. To come out risks ostracism and dismissal. To express sympathy is to be treated with hostility.

The church attempted to distance itself from Seventh-day Adventist Kinship International when in 1987 the General Conference filed suit for “breach of trademark.” The church lost. Later, in 1994, the GC administration committee voted that GC personnel were not to speak to gatherings of homosexuals. As Lawson notes, the official church position was becoming more polarising at a time when law courts were recognising the equality of homosexual and heterosexual persons.

Part four examines scriptural and theological perspectives. Jones writes, “Romans 1:24-27 contains the Bible’s only substantive consideration of homosexual conduct.” But it is not a complete discussion. It is a preliminary comment that serves to introduce Paul’s thesis that Jews and Gentiles are equally lost in sin and in need of salvation. Those that read Leviticus 18 and 20 literally, bring a preformed perspective that distorts Paul’s message. Homosexuality is not the central issue in Romans 1. Furthermore, in discussing homosexuality, it is not clear that Paul’s conceptual horizon and ours coincide. Indeed, there has been a serious confusion of categories.

For Guy, “It is Scripture as a whole that is properly the ‘rule of faith and practice.’” Applying this principle leads him to conclude that “Scripture does not condemn all same-sex love.” Gane’s literal interpretation of Leviticus does not let him entertain pro-gay views. Nevertheless, he concludes that the church has some work to do to restore itself as “the trusted friend rather than the enemy of sinners.” Rice notes with approval that in recent years the church has “become more open to the complexity of human sexuality and willing to consider more helpful responses.”

Part five contains four papers on Christian social perspectives, in which the writers press the church towards greater fairness and compassion, towards becoming the “just, open, caring” community it should be. “God puts a tremendous value on human freedom.” We must do no less.

We all have our responses. Perhaps these are well-informed; on the other hand, they could be tainted by prejudice or by misuse of Scripture. Whatever your current view, this book will inform and challenge your understanding.

Christianity and Homosexuality: Some Seventh-day Adventist Perspectives is a collection of essays dealing with the increasingly significant issues related to people who have a homosexual orientation and the way Christian churches relate to them.

The book is edited by David Ferguson, Fritz Guy, and David Larson and is the product of a collaboration between SDA Kinship, International (a support organisation for gay Adventists) and the Kinship Advisory Board [Kinship Advisory Council] (a group straight Adventist leaders formed to advise and lead SDA Kinship).

The subtitle of the book is important. The writers all come from a Seventh-day Adventist (SDA) perspective. That does not mean they write from any official SDA position. In fact, much of the book may make the officials of SDAism somewhat uncomfortable. It is published by Adventist Forum -- an independent SDA organisation which fosters open communication and thinking amongst its members.

Christianity and Homosexuality has an interesting structure (see the diagram).I’d like to make a couple of comments about this structure because I think it is highly significant. Notice the location of the scriptural and theological perspectives. Most conservative Christians would want to place the Bible and theology at the beginning of the book and filter all other perspectives through its lense. However, the editors of this book perhaps recognise that placing the Bible at the beginning of the discussion would destroy any chance of an open inquiry into the subject of homosexuality.

I don’t think there is any doubt that the majority of Christians would make the assumption that the Bible condemns homosexuality outright. Beginning from this premise, a great deal of what this book discusses would be dismissed from the outset. However, by taking the approach they have, the editors lead us to the text after considering a whole range of extra-biblical material that makes us realise that the text needs, perhaps, to be read afresh and our traditional understandings rigorously critiqued. Let me lay out the journey the editors take us on -- at least as I read it.

Reading through Christianity and Homosexuality is an enlightening, provocative journey. I learned a great deal by reading this book. And the responses at the end of each chapter provided sensitive counterpoints to the material in the previous chapters.

This book probably raises more questions than it answers. But it is urgent that the questions be asked and discussed. So many Christian gay men and women are hurting deeply as a result of misunderstanding, prejudice, and demoralising treatment.

Although Christianity and Homosexuality is clearly written from an SDA perspective there is much of enormous value for any Christian considering this important issue. The best books bring greater understanding by challenging our thinking, pushing us beyond our present limited perspectives, generate discussion, and remind us that the freedom and grace of the gospel are the central tenets of our faith that should inform all that we do. If these are the criteria for a good book then Christianity and Homosexuality is a good book. But it is not just a good book - it is an urgent call to leave the pages and look out to our brothers and sisters who struggle to work out how to live out their faith while experiencing a sexual orientation they did not choose but defines much of who they are. It is up to all of us to love our gay brothers and sisters as Christ has loved us.