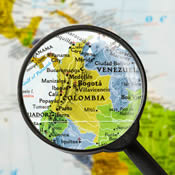 Colombia is a country located on the corner of South America, bathed by two oceans and crossed by a beautiful mountain range, full of valleys and deserts. This diversity can also be observed in our Kinship family that has flourished in three cities: Bogota, Medellin, and Cartagena. This year we will be starting the groups of Barranquilla and Bucaramanga, cities with a high Adventist presence in our country.

Kinship today has grown in fronts such as spirituality, healthy recreation, and healthy lifestyles, as well as support in the work of our members, all supported by some fronts of the Colombian state, which has provided spaces and resources for it.

We have articulated support with other spiritual affirmation groups such as the Mormon and Methodist church in the last year. We have programs to support young people, diverse couples, and families (mothers and fathers), which has made us a unique and organized community. In 2018 we won the San Sebastian Prize, which is awarded to communities working for the spirituality of LGBTI people.

Our MAJOR CHALLENGE is to be able to articulate these programs with our Adventist church so that we can continue serving in love of diversity.

Surf, Sand, and Sea… and Kinship!
MESSAGE FROM THE PRESIDENT