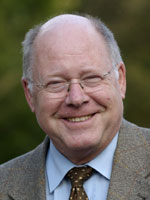 Reinder Bruinsma has been a Seventh-day Adventist conference president for the Netherlands and for Belgium, General Conference administrator, pastor, and author - among several other things. In what he loosely calls his "retirement" he continues to write, speak to Adventist leadership and laity conferences and, attend other meetings around the world.

Reinder met Kinship as a group when he was a speaker at a European Kinship Meeting (EKM) in the Netherlands. He says the stories he heard from us at that meeting began to change his thinking about Adventists whose gender and sexuality included much diversity. After attending several Building Safe Places—for Everyone meetings in Germany, he decided to write a more inclusive Seventh-day Adventist Theology. It shares his personal and theological journey.

Reinder, Frieder and Ingrid Schmid, Per Bolling, and Valerie Ballieux have spent hours translating the text from English into the five languages we are sharing with you here. The Spanish translation is in process. Ruud Kieboom did his usual beautiful layout work. Several Kinship and Building Safe Places members have been sending paper copies to pastors and administrators in their areas.

We would be delighted if you pass along this electronic version. If you would like paper copies or if you have questions/comments, please feel welcome to Cette adresse e-mail est protégée contre les robots spammeurs. Vous devez activer le JavaScript pour la visualiser.. — Catherine Taylor