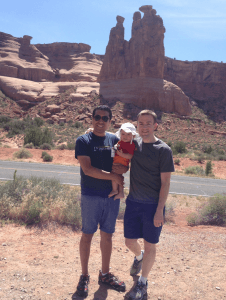 Alberto and I met at an Adventist boarding school 20 years ago. We were in the same class, but didn’t know each other very well. Alberto was actively involved in a variety of sports and student leadership; I was in band, choir and editor of the newspaper. Our interests didn’t overlap much. But then in college we realized that we had one, very important, thing in common.
As gay students at an Adventist college, we self-selected into the same circle of supportive friends. There weren’t many of us, but there were enough that I never felt isolated or intimidated. We weren’t activists; we didn’t try to change the institution’s views or policies on gay students, but we also didn’t try to hide who we were. When we started dating senior year we didn’t hold hands in the cafeteria, but even a casual observer would have known that we were more than just friends.

Seven years later, while living in Massachusetts, which at that time was the only state that allowed gay marriage, we were married in our tiny (microscopic!) Boston apartment with a few of our closest friends as witnesses. Both of us had always known that we wanted to be fathers — a commitment to family is one of the things that drew us together in the first place — and we immediately began the process of trying to have a child through surrogacy. That journey took another six years, but last June our daughter Dalia was born.

The amount of love we feel for that little girl is not something that I can confine to these few paragraphs, so I’ll just say that we want her to have the richest family, social, and spiritual life possible, while at the same time, we want to shield her from as much hurt as we are able. Our relationship to the Adventist church is a complicated piece of that.

Alberto and I continued to identify as Adventists after college, although we rarely attended church. In Boston, we went to a local congregation several times, but stopped attending after we started to attract attention. We were getting too old to pretend to be just roommates and bachelors. No one ever asked if we were gay and no one ever made us feel explicitly unwelcome. But it was an undercurrent of every conversation. We always felt that condemnation was a few inexpertly-dodged questions away.

Instead, we started “having church” in our living room every Sabbath. We would pray together, study our Sabbath School quarterly and have rich, theological discussions. In a lot of ways, this helped us to define our individual beliefs (we disagree on several things) and to grow spiritually. At noon we would wind up our discussions and eat lunch while watching Dwight Nelson on 3ABN.

This version of church worked for us. We felt spiritually fulfilled in a safe space where we didn’t have to pretend to be anything we were not, and we didn’t attract attention. But having a daughter changed that. We’re no longer looking for anonymity. Instead, we want a community. We want to find a church that provides her with the same positive experiences we had growing up Adventist. We want Cradle Roll and potlucks and Pathfinders. We want her to have other Adventist friends who understand why she can’t go to the movies on Friday night. We want her to have positive, Christian role models. Church in the living room, delivered via cable, is not going to fulfill what she needs from the Church at this age.

But we also don’t want to expose her to judgment. We don’t want church members to undermine her relationship with us, or our authority as spiritual mentors. We are good people, who love our neighbors and contribute to our communities, and we want the people who influence her spiritual life to underscore those qualities. But we are afraid that we will be reduced to our sexuality. We’re afraid that this one aspect of our lives will overshadow our interaction with the Church. We’re afraid that she will be hurt by attacks aimed at us.

Ultimately, what we are looking for is a Church family that will accept us as the loving family we are, and leave the issue of our sexuality between us and God.

Alberto and Philip reside in the San Francisco Bay Area with their daughter, Dalia. Philip works as a finance manager for a nonprofit and Alberto is returning to teaching after being a stay at home dad. In their free time they enjoy running, eating, traveling and spending time with their families. They attend church regularly on Sabbath mornings, but have not yet settled on a home church.

Look for more more Growing Up Adventist stories in the run-up to this year's Spectrum/Adventist Forum conference in San Diego, California, October 2-5.  If you would like to share your story or know someone who has an interesting story, please send a note to Diese E-Mail-Adresse ist vor Spambots geschützt! Zur Anzeige muss JavaScript eingeschaltet sein! expressing your interest.